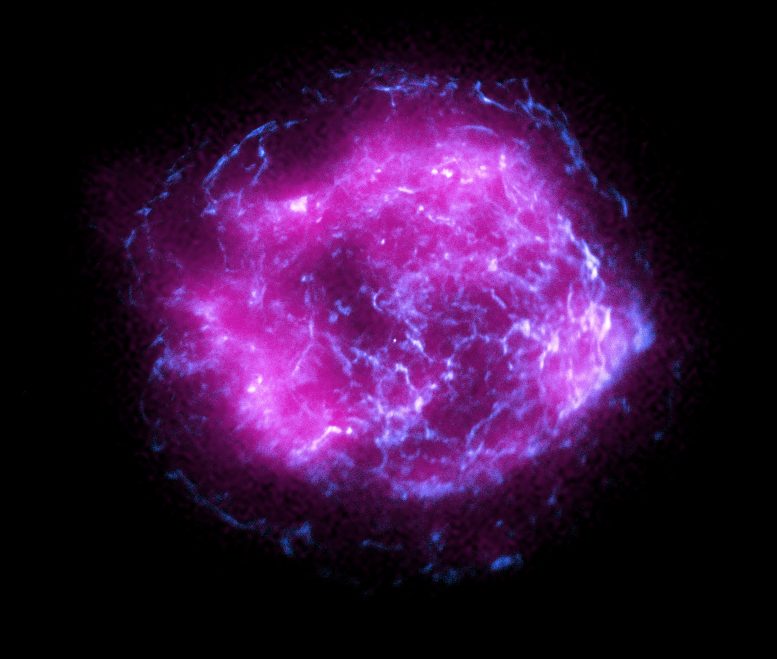 This image of the supernova remnant Cassiopeia A combines some of the first X-ray data collected by NASA’s Imaging X-ray Polarimetry Explorer, shown in magenta, with high-energy X-ray data from NASA’s Chandra X-Ray Observatory, in blue. Credit: NASA/CXC/SAO/IXPE

In the image above, the saturation of the magenta color corresponds to the intensity of X-ray light observed by IXPE. It overlays high energy X-ray data, shown in blue, from NASA’s Chandra X-Ray Observatory. Chandra and IXPE, with different kinds of detectors, capture different levels of angular resolution, or sharpness. An additional version of this image is available showing only IXPE data. These images contain IXPE data collected from January 11 to 18.

After Chandra launched in 1999, its first image was also of Cassiopeia A. Chandra’s X-ray imagery revealed, for the first time, that there is a compact object in the center of the supernova remnant, which may be a black hole or neutron star.

“The IXPE image of Cassiopeia A is as historic as the Chandra image of the same supernova remnant,” said Martin C. Weisskopf, the IXPE principal investigator based at NASA’s Marshall Space Flight Center in Huntsville, Alabama. “It demonstrates IXPE’s potential to gain new, never-before-seen information about Cassiopeia A, which is under analysis right now.” 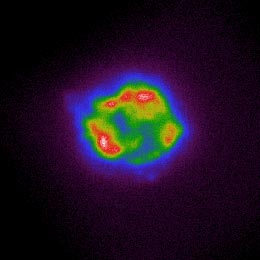 This image from NASA’s Imaging X-ray Polarimetry Explorer maps the intensity of X-rays coming from the observatory’s first target, the supernova remnant Cassiopeia A. Colors ranging from cool purple and blue to red and hot white correspond with the increasing brightness of the X-rays. The image was created using X-ray data collected by IXPE between January 11-18. Credit: NASA

A key measurement that scientists will make with IXPE is called polarization, a way of looking at how X-ray light is oriented as it travels through space. The polarization of light contains clues to the environment where the light originated. IXPE’s instruments also measure the energy, the time of arrival, and the position in the sky of the X-rays from cosmic sources.

“The IXPE image of Cassiopeia A is bellissima, and we look forward to analyzing the polarimetry data to learn even more about this supernova remnant,” said Paolo Soffitta, the Italian principal investigator for IXPE at the National Institute of Astrophysics (INAF) in Rome.

With polarization data from Cassiopeia A, IXPE will allow scientists to see, for the first time, how the amount of polarization varies across the supernova remnant, which is about 10 light-years in diameter. Researchers are currently working with the data to create the first-ever X-ray polarization map of the object. This will reveal new clues about how X-rays are produced at Cassiopeia A.

“IXPE’s future polarization images should unveil the mechanisms at the heart of this famous cosmic accelerator,” said Roger Romani, an IXPE co-investigator at Stanford University. “To fill in some of those details, we’ve developed a way to make IXPE’s measurements even more precise using machine learning techniques. We’re looking forward to what we’ll find as we analyze all the data.”

IXPE launched on a Falcon 9 rocket from Cape Canaveral, and now orbits 370 miles (600 kilometers) above Earth’s equator. The mission is a collaboration between NASA and the Italian Space Agency with partners and science collaborators in 12 countries. Ball Aerospace, headquartered in Broomfield, Colorado, manages spacecraft operations.

We will be happy to hear your thoughts